For the last year and a half, the Olympic Hills school community (in interim at Cedar Park) has pushed hard for SPS to revisit the proposed Cedar Park boundary due to major concerns about equity and safety.

ublished its recommendation to the school board’s operations committee, and unfortunately, the proposal addresses capacity, but not equity.  We are very frustrated, and disappointed with the SPS proposal.

The SPS recommendation is especially troubling because a taskforce (including teachers and parents, myself included) met with SPS staff to attempt to use the SPS racial equity “toolkit” to analyze the boundary, yet the final decision making (which did not include teachers or parents) was based on capacity, not equity.

Have a look at the numbers and compare for yourself.

First, the Cedar Park numbers from the current, board-approved boundaries for 2017-18.  Remember, these are the numbers that caused the initial equity concerns that led to community meetings and the taskforce:

Then, the Cedar Park numbers for the proposed amendment.

All along, our community’s desire has been to reduce the concentration of historically underserved students in Cedar Park.  However, because the proposed solution is based on capacity rather than equity, the percentages for all the categories actually increase.

There will also be upcoming community meetings where SPS will share these decisions:

Check out this awesome post from the Seattle DOT blog!

Students Learn About the Safe Routes to School Program

On Friday January 29, 2016, 296 students from Cedar Park Elementary (Olympic Hills Interim) learned how to be safe while walking or biking to school. Monica Sweet, an active member of Lake City Greenways, presented the importance of reflectors for visibility at night. One of the parents, Karoliina Kuisma, also joined her.

The demonstration at the school assembly featured Sweet sporting all-black attire with reflectors pinned to the front of her coat. The lights on stage were turned off and as she walked across the stage, the students had difficulty spotting her. Sweet turned to face the audience, as Kuisma used flash photography to illuminate the reflectors. The students were amazed at how bright the reflectors were.

After the presentation, Sweet and Kuisma visited each classroom to deliver packages of reflectors shaped like bicycles, umbrellas, hearts, and otter paw prints (the school’s mascot). This presentation would not have been possible without the help of the Safe Routes to School Mini Grant Program. This program provides up to $1,000 to schools, PTAs, and community groups for education and encouragement programs for walking and biking to school.

We want to thank Monica Sweet and Karoliina Kuisma for educating the students at Cedar Park Elementary (Olympic Hills Interim) about our Safe Routes to School Program and for setting an example for future presentations.

To learn more about our Safe Routes to School Program as well as our mini grant program, visit our website.

The Growth Boundary Plan enacted in 2013 creates inequities and imbalances in the Olympic Hills and Cedar Park attendance areas for 2017-2018 when the new Olympic Hills building opens. This meeting offers an opportunity to address the following issues:

This skewed enrollment will overwhelmingly impact our minority and high-poverty students, a violation of district policy as well as Seattle Public Schools best practice. 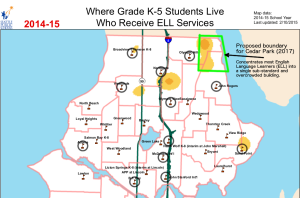 Over the winter school break, the PTA partnered to offer a FREE computer coding camp, and KING5 news covered it.  Watch the video and read the full story on KING5 (video starts with an advertisement).

Special thanks to Creative Coding 4 Kids who are running the camps, and the sponsor of the event, UW Alumni Katherine A. Hitchcock, whose recently released memoir, Atypical Girl Geek, describes her career as a programmer.

This article, which made the front page of the Nov. 13th Seattle Times, highlights the  Teacher Residency Program at Olympic Hills Elementary.